The 350NH Youth Team threw a rally in Concord to call out the NH legislature’s inaction this session and demand renewable energy legislation.

CONCORD, NH — On a windy Concord afternoon, approximately 50 people showed up to the front of the State House to protest leaders’ inaction on the climate crisis. Frustrated by the lack of progress on climate legislation, several people, including Senator David Waters, gave speeches about the dangers of fossil fuels and extolled the virtues of renewable energy. Other speakers, such as Dan Weeks, focused on the specific benefits of certain forms of renewable energy, like solar or offshore wind. The speeches, accompanied by chants and music from the Leftist Marching Band, left everybody in high spirits and eager to make a difference in the climate crisis. As the crowd dispersed, they plastered stickers around Concord with the slogan “Rally for Renewables– Climate Justice Now” a message to legislators.

“Today we are demonstrating that we want our legislators to do the right thing and pass bills in favor of renewable energy,” said Nikhil Chavda, student at Coe-Brown and 350NH Youth Fellow. “There are solar power bills in the State House right now, and we want our elected officials to stop ignoring our calls and pass this legislation. We are here because the state’s current actions and status quo are totally unacceptable, and they need to make some changes.”

In the weeks before the rally, climate-related legislation stalled in the State House, leaving many NH residents feeling frustrated and helpless about the future of the climate. Among the bills that failed were HB1506, HB1601, HB1621, and HB1419. These bills contained investments in renewable energy, energy efficiency, and climate-change related planning.  Recognizing this, the 350NH Youth Team brought their response to the state house: that the young people of New Hampshire are tired of our legislators’ inaction.

“We can bring hope back to my generation by making effective change,” said Katherine Lessard, 350NH Youth Fellow and resident of Bow, NH, where the last coal fired power plant in New England stands. “We’re here today to demand legislation that will make a tangible impact on stopping the fossil fuel industry from taking the futures and the hope from my generation. My generation deserves the chance to look forward to the future, not fear it.”

The crowd was high-energy, with a mixture of youth activists, seniors who were veterans of the climate fight, local legislators, and members of ReVision Energy. People held massive signs and banners with slogans such as “Climate Justice NOW,” “There is no Planet B,” and “Denial is not a policy.” The 350NH Youth Team focused on communicating the urgency and impact of climate justice.

“I am here to plead for climate action because we know for a fact that climate change is causing drier, warmer winters and it is happening more quickly in the Northeast than in many other parts of the world,” said Levi Roberts, 350NH Youth Fellow from Washington Valley. “Chris Sununu boasted over the years that he is a guy standing for expansion of our so-called “thriving” state economy and job growth, but he failed to sign climate legislation that made it to his desk, and he prevents our state from transitioning away from fossil fuels.”

350NH activists plan to capitalize off of this momentum by pressuring elected officials to make change.

NH Student Activists Gathered on May 8th to Demand Bank of America End Funding to the Fossil Fuel Industry:

Bedford, NH — On Saturday evening a group of high school activists from the 350NH Youth Team and members of Extinction Rebellion met at the Bank of America in Bedford to protest the bank’s involvement in funding the fossil fuel industry. Speakers urged for the end to the money pipeline from banks and other firms that keeps the fossil fuel industry afloat even as our society has increasingly recognized the environmental costs of fossil fuels. The event was both virtual with a Zoom call run by youth team members and in-person where participants drew in chalk along the sidewalk near the bank.

Nikhil Chavda, sophomore at Coe Brown Academy and organizer of the event says: “Bank of America lends money to fossil fuel companies that build pipelines such as Line 3 in Minnesota. Between 2016 and 2020, Bank of America lent $3.16 BILLION dollars to Enbridge, the company building the pipeline. They lent $350 Million to the Dakota Access Pipeline, which still operates today! Without money from big banks, fossil fuel companies wouldn’t have enough money to support the building of more pipelines. Bank of America could stop this, if they stop lending these companies billions of dollars.”

This action, organized by high school-aged activists across New Hampshire, sends a message to the CEOs of Bank of America and other big banks that it is unacceptable to profit off of the destruction of the climate. Individuals in positions of power have failed to protect the climate and it is now up to ordinary people to make the changes necessary in the time we have left. We demand that the people in power step up, and stop investing money in the fossil fuel industry, funding dangerous projects such as the Line 3 Pipeline, currently being built on indigenous land.

“We are calling from all corners of the globe that it is time to Defund Line 3. This is just a start, but it is not the end of our efforts. We will continue to fight until we strip the monetary foundation of the fossil fuel industry away and put out the fire that threatens all of us, once and for all” says Anna Rose Marion, a senior in high school and organizer of the event.

Grassroots resistance to the pipeline is growing across the country, day by day. Actions in opposition will continue to be organized, and the corporations funding such destruction of the planet will be targeted. Bank of America is not innocent, and the youth of New Hampshire will not stand to pretend that they are. This action was one of many, and we will continue to fight until big banks stop funding the fossil fuel industry, and the building of Line 3 in Minnesota.

This action is a part of a global day of action to call on banks to Defund Line 3 pipeline. Learn more about the national coalition here. 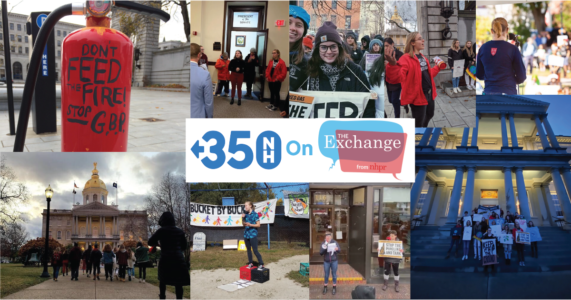