Driving through the towns just below the Massachusetts/New Hampshire border, one sees a lot of signs these days.

Tennessee Gas Pipeline Company, a subsidiary of Texas-based Kinder Morgan, wants to build a pipeline to carry fracked natural gas (NG) across the northern edge of Massachusetts from Richmond, on the New York border, to an existing NG hub in Dracut, MA, roughly 13 miles southeast of Nashua, NH. There it would join an existing network of pipelines taking much of that gas northward to Canada. The capacity of this pipeline would be nearly four

times that required to overcome any shortages experienced during winter periods of peak demand.

Residents of towns along the Massachusetts-New Hampshire border were first alerted that something was up when representatives of Kinder Morgan came knocking on their doors, asking whether KM could survey their properties by drilling to find what is under the topsoil.

NG can be sold in Europe for two to three times the U.S. market price and in Asia for three to four times the U.S. price. Under North American Free Trade Agreement (NAFTA), exporting to Canada does not carry the restrictions that apply to export to non-free-trade countries. The reason for the rush to build pipelines to Canada is to get the gas where it can more easily be sold abroad for more money.

Liberty Utilities, a subsidiary of Canadian energy giant Algonquin Power & Utilities Corp., would like to see a spur line from Massachusetts to a yet-to-be-constructed hub in Merrimack, NH. The route originally proposed would pass directly through conservation land of Hollis’ Beaver Brook Association, a popular land trust.

In an effort to preserve land which had been donated or purchased with monetary gifts, Beaver Brook Association hired an engineer to come up with alternative routes for the pipeline. One of those alternatives would still pass through the town of Hollis, but would avoids the conservation land; two would pass through adjacent Brookline, NH. Both towns are now joining their Massachusetts neighbors in a fight to stop these pipelines altogether. 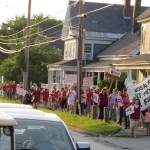 Residents along the proposed routes question if there’s any real need for the added capacity the pipeline would provide. They resent the intrusion into their towns. They question the ethics of having to pay for pipelines through a surcharge on their electric bill. They are concerned about Kinder Morgan’s safety record. The gas passing through the pipeline would not have been purified, and would contain residues of chemicals used in the fracking process. It would not have had an odorant added to aid in leak detection.

Landowners are faced with a limited number of choices. The final pipeline siting decision will be made by the Federal Energy Regulatory Commission (FERC). Once a FERC permit has been granted, their land can be taken through eminent domain.

Nearly 30 towns have united to oppose the construction of these lines. That’s the reason for the signs, and for a rolling protest moving from west to east in Massachusetts, ending with the presentation of a petition to Massachusetts’ Governor Patrick on July 30.

The proposed pipelines ignore our need to get away from producing and burning fossil fuels. Natural gas is primarily methane, a greenhouse gas over 80 times more powerful than CO2 in the short term, over 20 times more in the long term. Studies show that, when a full accounting of methane’s impact on the environment is taken into account, fracked natural gas has no benefit over coal or oil in reducing greenhouse gas effects. Building the proposed pipelines would involve an enormous investment, only to postpone the inevitable need to transition to sustainable energy sources.

To support your neighbors and our environment, contact your Governor and your state representatives, and join the upcoming rallies.

No Fracked Gas in Massachusetts here 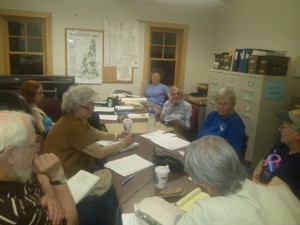