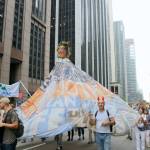 What a glorious day it was! Blocks and blocks of passionate climate activists, social justice activists, seasoned marchers, first-time marchers – all lining up together to demonstrate our demand that world leaders address climate change with forceful, immediate actions.(Thanks to Megan Seidell for these photos of some of the great art in the March!)Folks boarded charter buses in Concord, Nashua, and Portsmouth, NH, at about 5:30 a.m., ready for the 5-hour trip to New York City. As we arrived in the city, the 30 or more blocks designated for people to line up for the March were already filled with a lively and diverse mass of people from all over the country and beyond. Canada was well-represented. The March started at 11:30, but the farthest from the starting point didn’t start moving for more than 2 hours after that – all due to the incredible size of the group!

At 12:58, we all watched for a signal to indicate the start of a 2-minute period of silence, in memory of those who have suffered from the ravages of climate change and the fossil fuel industries. As those in front of us raised their hands, we raised ours and fell silent. Then, at 1:00 p.m. a tremendous wave of sound – yells, horns, bells, whistles, claps – swept from the beginning of the march to the end. We were sounding the alarm about Climate Change!

This gigantic action took months of planning by many people in many organizations.

heck out the videos of the People’s Climate March, and look at the list of groups that were involved, at Peoplesclimate.org. 350 New Hampshire is very grateful to 350.org for the substantial financial assistance that allowed us to lower the cost of bus tickets for the riders. We are also thankful to

Sierra Club Maine, for generously subsidizing buses and agreeing to pick up riders in Portsmouth.