The bill, as introduced, would require the the Department of Environmental Services to examine the potential harm to the public and the environment resulting from the transportation of tar sand oil through the Portland-Montreal Pipeline.

Representative Marcia Hammon introduced the bill on behalf of herself and its other sponsors, outlining the plan for such transportation and some of the anticipated risks. Testimony intended to allay fear of these anticipated risks was given by the Canadian consul.

A DES representative explained that the Department has limited expertise and no regulatory authority with respect to pipelines; if the bill were passed, it would have to sacrifice staff time and budget intended for other responsibilities.

Others testifying in favor of the bill were Cathy Corkery for the Sierra Club; Katie Thomson, a UNH student just completing a research study of the potential impact of the transmission of tar sands oil across northern New Hampshire on local culture, business and tourism; Carol Foss, Audubon Society of New Hampshire; Trudy Mott-Smith and Doug Whitbeck of 350NH.In consideration of further written testimony and an amendment by Rep Marjorie Shepardson spelling out in more detail what would constitute the examination of potential harm to the public and the environment, the Committee appointed a subcommittee to revise the bill.

The revised bill will replace DES with a special legislative committee to carry out the examination, and will possibly expand the charge to include transportation of tar sands oil by truck and rail. 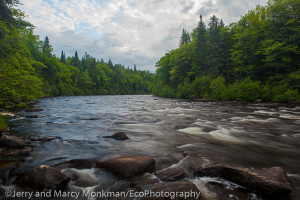 Today HB 1376, bill in the New Hampshire House heard testimony. If passed, House Bill 1376 would require the Department of Environmental Services to examine the potential harm to the public and the environment resulting from such pipeline transportation of tar sands bitumen.

The following testimony was submitted by one of 350NH’s members.

My name is Corry Hughes, I live in Jefferson NH. My husband and I stand in support of HB 1376 which would require the examination of the potential harm to the public and the environment of New Hampshire from the transportation of bituminous tar sands through Coos County by the Portland-Montreal pipeline.

Our town of Jefferson is one of five communities in southern Coos County that lies directly in the path of the Portland- Montreal Pipeline. Reversing the flow of this aging pipeline to carry toxic tar sands bitumen would put these communities at grave risk in the event of a leak or spill. The pipeline transverses forests and farmlands, parks and yards, and 80 bodies of water, from small brooks to major rivers like the Connecticut and the Androscoggin as it goes through northern NH.

Pipelines transporting tar sands diluted bitumen are statistically more than 3 times more likely to spill than those carrying typical crude; this would certainly be likely in the case of the Portland-Montreal Pipeline, an old pipeline that was not designed to carry this heavier, denser substance under high pressure in a reverse direction than intended. A spill in a stream or river would be almost impossible to clean up, and would pollute the water for miles downstream. A broken pipe on farmland or in a neighborhood would displace families and render that land unusable indefinitely. Diluted bitumen and its additives such as benzene (a carcinogenic neurotoxin) put the health of our wildlife, livestock, and above all, our families at risk.

In my town of Jefferson, the pipeline goes within feet of our elementary school, creating a nightmare scenario should a leak occur in that area which could make dozens of young children very sick. And think of the economically disastrous consequences if the leak occurs in rivers or near businesses, especially those that depend on tourism, such as Santa’s Village in Jefferson, a well-known family attraction that has delighted generations (and which is Jefferson’s biggest employer). The pipeline passes very near Santa’s Village; a spill there could shut it down, probably permanently.

We simply cannot afford the risk of dirty tar sands oil passing through New Hampshire, to be carried to overseas markets. All the risks (and no reward) would fall on us and put in peril our precious families, our homes, our landscape, and our economic future. We strongly urge passage of HB 1376 as a first step in protecting us and our environment. 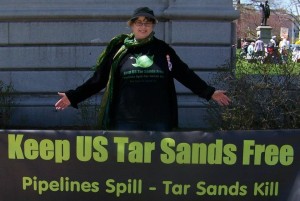 350NH is leading the campaign to register NH citizens’ opposition to the transportation of tar sands oil through the State by sponsoring resolutions to be voted on at town meetings.

The first step in this campaign is educating voters about the proposed use of the Portland – Montreal pipeline from Canada to Casco Bay in Maine. Presently the pipeline carries conventional oil from Casco Bay to Canada. There is a proposal to reverse the flow through

the pipeline to carry oil extracted from tars sands in Canada to Casco Bay for export. The pipeline is about the same age as the one which leaked last year in Mayflower, Arkansas.

Given all the publicity about the Keystone XL pipeline in the Midwest, many NH residents are surprised to learn about the possibility of the same toxic, corrosive tar sands proposed for Keystone being piped through Vermont, New Hampshire and Maine. 350NH members are highlighting a substantial difference between Keystone XL and the existing Montreal-Portland pipeline: the age of the pipeline. Keystone XL would be newly built, whereas the Montreal-Portland is 50 years old and not designed to carry tar sands oil.

Citizens petitions are being circulated in, Loudon, Jefferson, Gorham, Bath, Lancaster, Whitefield and Randolph, the second step needed to put a resolution against piping tar sands oil on town meeting warrants. A citizen’s petition has been completed in Exeter and the article made it through the deliberative session without amendment. It will be voted on by paper ballot on March 11. 350NH will be sponsoring educational opportunities, including slide shows, flyers, letters to the editor, and public demonstrations from now through the town meetings in March.

The results of town meeting votes affirming resolutions against the piping of tar sands oil across the State will be sent to relevant political, regulatory and corporate players.

If you live in any of the towns where this resolution will be brought to the voters, you can help! Email us at 350newhampshire@gmail.com. Non-residents of those towns can help by being present at public demonstrations and donating to 350NH to help us with printing and other costs.

Below is the text of the Jefferson Town Resolution

We, the undersigned voters of the Town of Jefferson, New Hampshire, request that you insert in the warrant for the 2014 Town Meeting, the following article:

To see if the Town will vote to instruct the Selectboard to enact the following resolution to protect citizen health, safety, and quality of life; water resources and environmental quality; and local, regional, and state economies with respect to the transport of crude oil through New Hampshire.

WHEREAS, 18” and 24” pipelines were constructed across northern New Hampshire in 1950 and 1985, respectively, to transport imported light crude oil from Portland, Maine, to Montreal, Quebec; and

WHEREAS, present market conditions have substantially reduced demand for transporting imported light crude oil inland from the Atlantic coast; and

WHEREAS, abundant production of heavy crude and tar sands oil in western North America has created a market for transportation of these oils to Atlantic ports; and

WHEREAS, these market conditions suggest that reversing the direction of flow on the above-mentioned pipelines could become economically profitable for corporations in the foreseeable future; and

WHEREAS, a significant spill of any petroleum product along the pipeline Right-of-Way in New Hampshire would have a devastating effect on the economy and environment of Jefferson, including property values, business, tourism, recreation, hunting and fishing; and

WHEREAS, pipeline age and the hydraulic stresses resulting from reversal of flow can contribute to the likelihood of a spill; and

WHEREAS, existing technologies and practices for inspecting pipeline integrity have failed to prevent catastrophic pipeline failures;

NOW, THEREFORE, BE IT RESOLVED:

1. That the Town expresses its opposition to the transport of tar sands oil through New Hampshire and the Town of Jefferson and its deep concern about the economic, environmental, and public health risks of such transport; and

2. That the Town strongly encourages the New Hampshire General Court and the U.S. Congress to take all reasonable steps to ensure that any proposed flow reversal of the Portland-Montreal pipeline receives thorough review at both state and federal levels of economic, environmental, and public health and safety impacts, including the impact of spills; and

3. That the Town transmit a copy of this resolution to all relevant state, federal, and other pertinent entities.